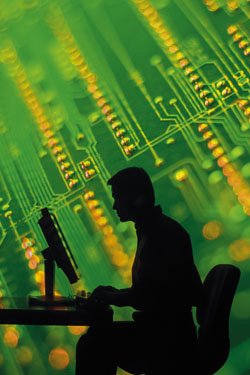 How it all started...

Dr. Karen Walters graduated NYCC and rented a 600 square foot office with two treatment rooms in Little Ferry, New Jersey. Within 24 months, she was handling more than 150 patients weekly and had outgrown the space. She simultaneously began looking for computer software and a larger office to handle her growing practice (eventually treating > 100 patients/day and then expanding to a multi-provider, multi-disciplinary setup). Her most coveted software feature was a report that would help her avoid losing patients who had recently stopped coming in for care – the ones that fell through the cracks – before too much time had elapsed. All the computer systems were expensive. (The representative from Parker Turnkey Computer flew his own plane to NJ to provide a demo! Of course, 11 years later, Karl Parker signed contracts on behalf of the Parker Foundation to sell ECLIPSE®... but that’s getting ahead of our story.)

Karen requested that her busy fiancée help with the software search. Mike, a veteran of multiple startups in New York City, was completing his graduate work in Computer Science and had an extensive healthcare, programming, and consulting background that ranged from busy physicians’ offices in the heart of Manhattan to large Fortune 500 companies. Karen’s frustration with extensive in-office demonstrations of systems such as PDR (Physician’s Digital Resources), PTC (Parker Turnkey Computer), LogiComp, and Chiroputer (Markson Management) eventually led Mike to make an offer… and so he wrote a program to handle her billing and give her the reports she wanted. The Chiropractic Office Manager® (renamed ECLIPSE® years later… but again, that’s another story) went into daily use on January 1st, 1986.And the next thing they knew, word got around. And it was for sale.

And that’s how it all began.